On Tuesday 8 January 2013, we joined the Opening Doors London Men’s Group for a book reading of ‘Love Me As I am — gay men reflect on their lives’. Opening Doors London (ODL) is a charity working in partnership with the charity Age UK to provide information and support services for older lesbian, gay, bisexual and /or transgender (OLGBT) people in the UK.

As our audience, we enjoyed the company of men who still remember life during and after World War 2 — carrying with them a history of silence within families, communities and the Armed Forces. They survived the ups-and-downs of our ‘gay liberation’ and witnessed historical events like the publication of the Wolfenden Report, the Homosexual Law Reform Society being founded in 1958, the Sexual Offences Act decriminalising homosexuality in England and Wales in 1967, the first UK Gay Pride Rally held in London in 1972, the first reported cases of HIV/AIDS in 1983 and the consequent national and global hysteria that followed, and Section 28 preventing teachers and local authority from intentionally promoting homosexuality or publishing material with the intention of promoting homosexuality or promote the teaching of the acceptability of homosexuality as a ‘pretended’ family relationship. Suffice to say, as a younger generation, we owe many of our freedoms to these men. 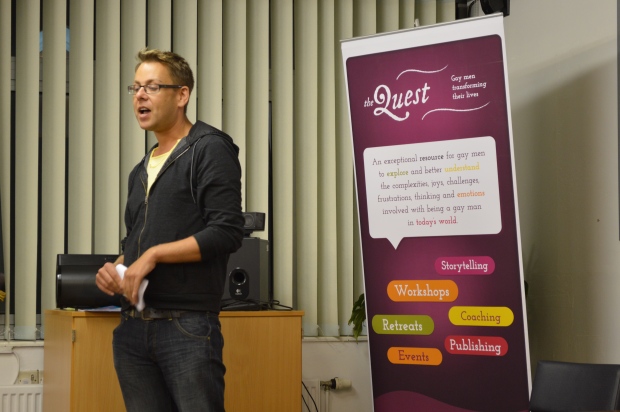 Paul Bradley explains the work and importance of the charity Diversity Role Models.

By reading some of the letters featured in ‘Love Me As I Am’ we also aimed to invite our elderly gay friends to share their own experiences of growing up gay. One gentleman recalled how he met his partner on a bus in 1943, and tenderly told us how they shared a life for 57 years. Another spoke of feeling isolated and alone as a teenager, having no one to confide in, being bullied because he was ‘different’ and struggled through his youth as the ‘only gay in the village’ until he joined the Air Force, after which, as he put it, things changed and the ‘fun’ started.

Much as we enjoyed an empathetic reception, there were also moments when the problems and challenges faced by gay men today, as highlighted in the book, came under serious scrutiny and criticism by the ‘elderly of our tribe’. Some strongly felt that the high incidence of teenage suicides, drug abuse and addiction, and the growing number of HIV infections are unacceptable and unnecessary destructive behaviours; “…especially when you have so much to be thankful for… much more than what we did. Our parents knew, but they never said anything. No one talked about and still we had none of this nonsense — the suicides, the drugs and all that. We were happy and just got on with it.”

Ronny, contributing author to Love Me As I Am sharing his letter.

It was a rich conversation that often exposed hard and uncomfortable truths. As I walked away at the end of the evening, I couldn’t help but to think:

Each generation has its own set of problems. If we successfully overcome our obstacles and face our problems with rigour, we’ll enable the next generation to do better and to be better. In many ways the elderly members of our community have given us an awful lot to be thankful for. They enabled us to live better lives. We owe a dept to them.

Admittedly, in some ways, the current generation of gay men needs to buck up. However, teenage suicides, mental health issues, substance abuse and addiction, and the high HIV infection rates among gay men will not go away unless we understand and address the root of these problems. This is the challenge we are all facing and much as it is an uncomfortable truth, it requires all of us — everyone still willing and able to make a difference — to look in the mirror. It also urges us to never forget that within the first call for acceptance and later liberation there was an echo of the words ‘Love me as I am’. Since then, this echo has not faded, even as time went by.

A special thanks goes to Nick Maxwell LGBT Development Coordinator at Opening Doors London and Jose Veiga for coordinating the evening. Also thank you to Paul Bradley from Diversity Role Models, and the contributing authors of ‘Love Me As I Am’ Neil Rothwell, Phil Garrood and Ronny P for generously giving your free time to participate in the event.Photographs of the event were taken by Opening Doors London volunteer, Mike Cooper.